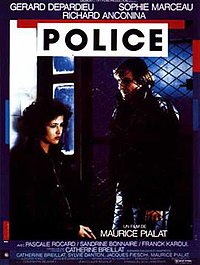 Police is a 1985 French romantic crime drama film directed by Maurice Pialat and starring Gérard Depardieu, Sophie Marceau, and Sandrine Bonnaire. Written by Catherine Breillat, the film is about a moody, jaded police detective investigating a drug ring who falls for a mysterious woman and is drawn into a shady and dangerous scheme. The film had 1,830,970 admissions in France.

When Mangin, a jaded French police inspector (Depardieu), starts to investigate a Tunisian drug ring, he finds his morals being clouded by his interactions with the criminals and especially Noria (Marceau), the girlfriend of one of them.