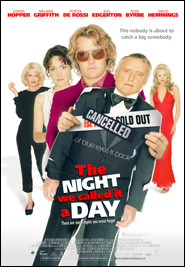 The Night We Called It a Day, also known as All the Way, is a 2003 Australian-American comedy drama film directed by Paul Goldman and starring Dennis Hopper as Frank Sinatra and Melanie Griffith as Barbara Marx. It also features Portia de Rossi, Joel Edgerton, Rose Byrne and David Hemmings. The movie is based on the true events surrounding Sinatra's 1974 tour in Australia. When the singer calls a local reporter (de Rossi) a "two-bit hooker", every union in the country black-bans the star until he issues an apology.

In 1974, Rod Blue is a surfer with shoulder-length hair in Sydney, Australia who also stages rock concerts, unsuccessfully most of the time. Needing a big idea, he decides to fly to Los Angeles, make himself more presentable and try to persuade Frank Sinatra to come to Australia to sing.