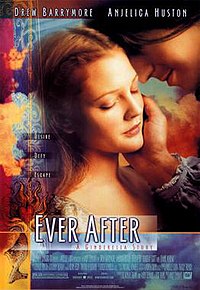 Ever After (known in promotional material as Ever After: A Cinderella Story) is a 1998 American romantic drama film inspired by the fairy tale Cinderella. It was directed by Andy Tennant and stars Drew Barrymore, Anjelica Huston, Dougray Scott, and Jeanne Moreau. The screenplay is written by Tennant, Susannah Grant, and Rick Parks. The original music score is composed by George Fenton. The film's closing theme song, "Put Your Arms Around Me", is performed by the rock band Texas.

In 19th century France, the Grande Dame summons the Brothers Grimm to discuss their interpretation of “Cinderella”, showing them a glass slipper and telling the story of Danielle de Barbarac: In 1502 Renaissance-era France, eight-year-old Danielle is the daughter of Auguste de Barbarac, a wealthy widower. He brings home his new wife, the Baroness Rodmilla de Ghent, and her daughters Marguerite and Jacqueline, and gives Danielle a copy of Sir Thomas More's Utopia. As he departs for business two weeks later (a fortnight) Auguste suffers a fatal heart attack just as he is approaching the gate, and delivers his dying declaration of love to Danielle, sparking Rodmilla's jealousy.