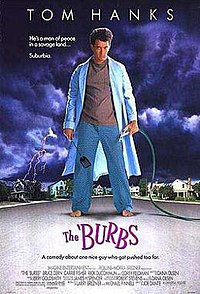 The 'Burbs is a 1989 American black comedy film directed by Joe Dante, and starring Tom Hanks, Bruce Dern, Carrie Fisher, Rick Ducommun, Corey Feldman, Wendy Schaal, Henry Gibson, and Gale Gordon. The film was written by Dana Olsen, who made a cameo appearance in the film. It pokes fun at suburban environments and their sometimes eccentric dwellers.

Suburban homeowner Ray Peterson is home on a week-long vacation. Late one night, he hears strange noises coming from the basement of his new and reclusive neighbors, the Klopeks. Ray and his other neighbors—Art Weingartner and Vietnam War veteran Mark Rumsfield—gradually suspect the Klopeks may be ritualistic murderers. On another night, they observe the youngest Klopek cart an oversized garbage bag to their curbside garbage can and aggressively mash it down. Later that night, during a rainstorm, Ray sees the Klopeks digging in their backyard. In the morning, Ray, Mark, and Art search the garbage truck for human remains after the Klopeks' trash is collected, but find nothing.