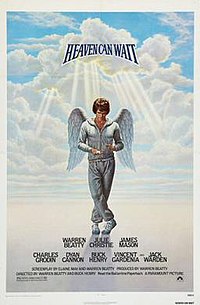 Heaven Can Wait is a 1978 American fantasy-comedy film co-directed by Warren Beatty and Buck Henry about a young man (played by Beatty) being mistakenly taken to heaven by his guardian angel, and the resulting complications of how this mistake can be undone, given that his earthly body has been cremated. It was the second film adaptation of Harry Segall's play of the same name, the first being Here Comes Mr. Jordan (1941).

Joe Pendleton, a backup quarterback for the American football team Los Angeles Rams, is looking forward to leading his team to the Super Bowl. While riding his bicycle through the older west side of tunnel one on Kanan-Dume Road in Malibu, California, an over-anxious guardian angel (known only as The Escort) on his first assignment sees Joe heading into the tunnel, and a large truck heading into the other end of the tunnel towards Joe and his bicycle. The Escort plucks Joe out of his body early in the mistaken belief that Joe was about to be killed. Pendleton immediately arrives in the afterlife.