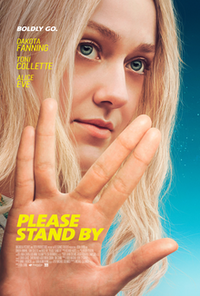 Please Stand By is a 2017 American comedy-drama film directed by Ben Lewin and based on the 2008 short play of the same name by Michael Golamco, who also wrote the screenplay. The film stars Dakota Fanning, Toni Collette, Alice Eve, River Alexander, and Patton Oswalt, and was distributed by Magnolia Pictures. After playing at various film festivals, the film was simultaneously released theatrically and on-demand on January 26, 2018.

Wendy (Dakota Fanning)—a brilliant young woman with autism and a fixation on Star Trek—lives a routine life in an Oakland, California group home where she is monitored by her primary caregiver, Scottie (Toni Collette). She spends her time writing a 450-page Star Trek script to enter in Paramount Pictures' screenwriting contest in hopes of winning the $100,000 prize.