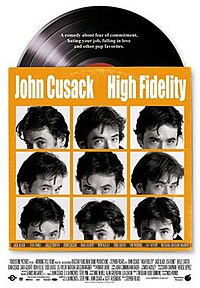 High Fidelity is a 2000 American romantic comedy-drama film directed by Stephen Frears, starring John Cusack, Iben Hjejle, Jack Black, Todd Louiso, and Lisa Bonet. The film is based on the 1995 British novel of the same name by Nick Hornby, with the setting moved from London to Chicago and the protagonist's name changed. Hornby expressed surprise at how faithful the adaptation was, saying "at times, it appears to be a film in which John Cusack reads my book."

Rob Gordon is a music-loving man with a poor understanding of women. After being dumped by his long-term girlfriend, Laura, he tries to understand how he failed in his relationships by seeking out his old partners.