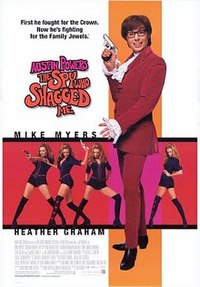 Austin Powers: The Spy Who Shagged Me 1999

Austin Powers: The Spy Who Shagged Me is a 1999 American spy comedy film directed by Jay Roach. It is the second installment in the Austin Powers film series. It stars franchise co-producer and writer Mike Myers as Austin Powers, Dr. Evil and Fat Bastard. The film also stars Heather Graham, Michael York, Robert Wagner, Seth Green, and Elizabeth Hurley. The film's title is a play on the James Bond film The Spy Who Loved Me (1977).

In 1999, spy Austin Powers enjoys his honeymoon with his wife, Vanessa Kensington. It is revealed that Vanessa has always been a fembot controlled by Dr. Evil, after she attempts to kill Powers. Dr. Evil then causes Vanessa to self-destruct. Austin grieves briefly before realizing he is single again and thus can have sex without commitment. A NATO monitoring facility observes the return of Dr. Evil, who confronts his son Scott and starts a coup on The Jerry Springer Show. At Dr. Evil's Seattle headquarters, Dr. Evil is presented with a one-eighth-size clone of himself, whom he names Mini-Me.