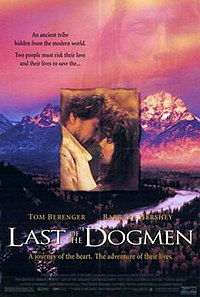 Last of the Dogmen is a 1995 American Western film written and directed by Tab Murphy (in his feature directorial debut). It stars Tom Berenger, Barbara Hershey, Kurtwood Smith, and Steve Reevis. Set in the mountains of northwest Montana, United States, near the Idaho, United States, and Canadian borders, the film is about a bounty hunter who tracks escaped convicts into a remote region and encounters an unknown band of Dog Soldiers from a tribe of Cheyenne Indians. The film was shot on location in Alberta and British Columbia, Canada, as well as in Mexico.

Distraught but skillful bounty hunter Lewis Gates, accompanied by his horse and faithful companion Zip, an Australian cattle dog, tracks three armed escaped convicts into Montana's Oxbow Quadrangle, at the persistence of his unforgiving ex-father-in-law, who blames Gates for his daughter's tragic death. Gates sees the convicts but hears shots. Investigating the scene, all Gates finds is a bloody scrap of cloth, "enough blood to paint the sheriff's office," a bloody shotgun shell, and an old-fashioned Indian arrow.