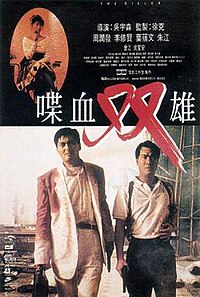 The Killer is a 1989 Hong Kong action thriller film written and directed by John Woo, and starring Chow Yun-fat, Danny Lee and Sally Yeh. Chow plays the assassin Ah Jong, who accidentally damages the eyes of the singer Jennie (Sally Yeh) during a shootout. He later discovers that if Jennie does not undergo an expensive operation she will go blind. To get the money for Jennie, Ah Jong decides to perform one last hit.

Hitman Ah Jong is on his last job for the Hong Kong Triad, but accidentally damages the eyes of a young nightclub singer named Jennie with a muzzle flash in a shootout. After the attack, Ah Jong begins to watch Jennie perform at the nightclub and escorts her home when she is attacked by thugs. Jennie and Ah Jong begin to fall in love during his frequent visits to her apartment.