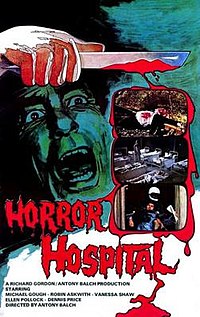 When attempts to break into the pop business leave him with nothing but a bloody nose, songwriter Jason Jones (Robin Askwith) decides to take a break with 'Hairy Holidays', an outfit run by shifty, gay travel agent Pollock (Dennis Price). After failing to chat Jason up, Pollock sends him to pseudo-health farm Brittlehurst Manor. On the train journey there, Jason meets Judy (Vanessa Shaw) who is travelling to the same destination to meet her long-lost aunt. Both are unaware that the health farm (i.e. "Horror Hospital") is a front for Dr. Storm (Michael Gough) and his lobotomy experiments that turn wayward hippies into his mindless zombie slaves. The wheelchair-bound doctor surrounds himself with an entourage that includes Judy's aunt, erstwhile brothel madam Olga (Ellen Pollock), dwarf Frederick (Skip Martin) and numerous zombie biker thugs. Dr. Storm also has a Rolls Royce car, fitted with a giant blade that decapitates escapees and interfering parties. Abraham (Kurt Christian) arrives at the Horror Hospital "looking for his chick" and is promptly whacked around the head by the motorcycle zombies. Frederick, fed up at literally being Storm's whipping boy, helps the kids escape—paving the way for the '70s' youth to put the final spanner/wrench in the works to Storm's scheme.