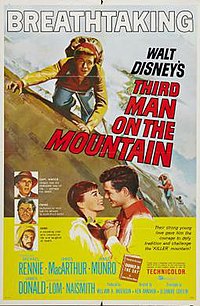 Third Man on the Mountain 1959

Third Man on the Mountain is a 1959 American family adventure film by Walt Disney Productions, directed by Ken Annakin and starring Michael Rennie, James MacArthur and Janet Munro. Set during the golden age of alpinism, its plot concerns a young Swiss man who conquers the mountain that killed his father. It is based on Banner in the Sky, a James Ramsey Ullman 1955 novel about the first ascent of the Citadel, and was televised under this name. The film inspired the Matterhorn Bobsleds attraction at Disneyland Park.