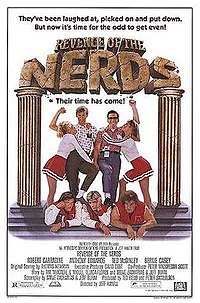 Revenge of the Nerds is a 1984 American teen sex comedy film directed by Jeff Kanew and starring Robert Carradine, Anthony Edwards, Ted McGinley, and Bernie Casey. The film's plot chronicles a group of nerds at the fictional Adams College trying to stop the ongoing harassment by the jock fraternity, the Alpha Betas, in addition to the latter's sister sorority, Pi Delta Pi.

Best friends and nerds Lewis Skolnick and Gilbert Lowe enroll in Adams College to study computer science. The Alpha Betas, a fraternity that includes most of the Adams football team, carelessly burn down their own house and, urged by Coach Harris, take over the freshman dorms. Dean Ulich designates temporary living space in the gymnasium and allows the freshmen to rush the fraternities. Lewis, Gilbert, and several other nerds fail to join fraternities, but are able to secure a dilapidated house near campus and repair it as a residence.