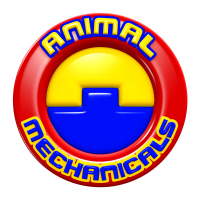 Animal Mechanicals is a Canadian animated television preschool series that was created by Jeff Rosen. Produced by Halifax Film, in association with the Canadian Broadcasting Corporation and distributed by Decode Entertainment, the series premiered in Canada on CBC Television as part of the Kids' CBC in 2007. In the United States, it premiered on The Hub on October 11, 2010.