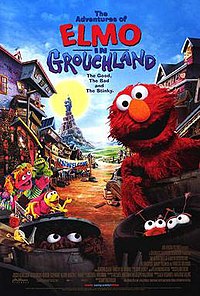 The Adventures of Elmo in Grouchland 1999

The Adventures of Elmo in Grouchland is a 1999 American musical adventure comedy film directed by Gary Halvorson in his feature film debut. This was the second film to be based on the children's television series Sesame Street, after Sesame Street Presents: Follow That Bird (1985). It stars Mandy Patinkin and Vanessa Williams alongside Muppet performers Kevin Clash, Jerry Nelson, Frank Oz, and Steve Whitmire.

One day Elmo plays with his blanket in his bedroom. He spills orange juice on his blanket and takes it to the laundromat where he runs into his friend Zoe. Zoe wants to hold the blanket, but Elmo doesn’t consent to sharing it, resulting in a tug of war that causes it to rip. Telly Monster, rollerskating out of control, comes and accidentally swipes the blanket leading to a chase around Sesame Street. Grover hears the chaos and turns into Super Grover in an attempt to help. The blanket falls into the hands of Oscar the Grouch, who sneezes on it and drops it in his trash can, and Elmo, Grover, and Telly crash into one another. Elmo dives into the bottom of Oscar's trash can, where he finds his blanket snagged on a door.