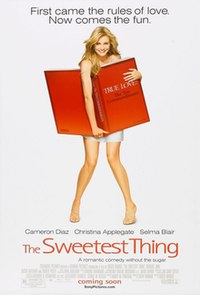 The Sweetest Thing is a 2002 American comedy film directed by Roger Kumble and written by Nancy Pimental, who based the characters on herself and friend Kate Walsh. It stars Cameron Diaz, Christina Applegate, and Selma Blair.

A group of men are interviewed regarding Christina Walters; they consider her a player and a user of men in the swinging singles market. She is a 28-year-old successful interior designer living in San Francisco near Chinatown.