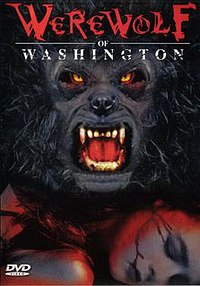 The Werewolf of Washington 1973

The Werewolf of Washington is a 1973 horror comedy film written and directed by Milton Moses Ginsberg and starring Dean Stockwell. Produced by Nina Schulman, it satirizes several individuals in the Richard Nixon Presidency.

Jack Whittier (Dean Stockwell) is the press secretary for the White House and for the President of the United States, while on assignment in Hungary, he is bitten by a wolf who actually turns out to be a man; when Jack tries to report it, he believes it is the work of Communists. He then meets a gypsy woman who tells him it was her son and he needed to die to be saved. She then gives him a charm and tells him to be careful now that he may suffer the same effects.