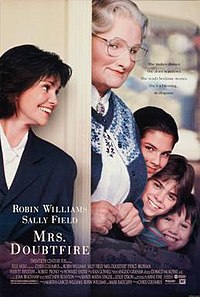 Mrs. Doubtfire is a 1993 American comedy-drama film directed by Chris Columbus. It was written for the screen by Randi Mayem Singer and Leslie Dixon, based on the 1987 novel Alias Madame Doubtfire by Anne Fine. Robin Williams, who also served as a co-producer, stars with Sally Field, Pierce Brosnan, Harvey Fierstein, and Robert Prosky. It follows a recently divorced actor who dresses up as a female housekeeper to be able to interact with his children. The film addresses themes of divorce, separation, and the effect they have on a family.

Daniel Hillard is a freelance voice actor living in San Francisco. Though a devoted father to his three children, Lydia, Chris, and Natalie, his wife Miranda considers him unreliable. One day, Daniel quits his job after a disagreement over a questionable script and returns home to throw a chaotic birthday party for Chris, despite Miranda’s objections. This infuriates Miranda to the point where she files for divorce. At their first custody hearing, the court grants sole custody of the children to Miranda; shared custody is contingent on whether Daniel finds a steady job and a suitable residence within three months.