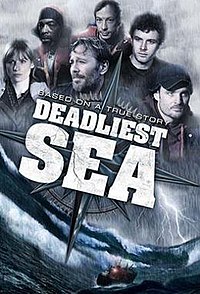 Deadliest Sea is a 2009 Canadian made-for-television film directed by T. J. Scott. It is about the crew of the Kodiak, Alaska-based scallop fishing vessel St. Christopher. It was produced by the producers of the popular Discovery Channel series Deadliest Catch, and originally aired on the Discovery Channel on July 19, 2009. While the film itself is a fictionalized account, according to a title-card at the beginning it is based on a true story.