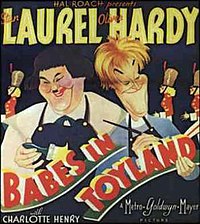 Babes in Toyland is a Laurel and Hardy musical Christmas film released on November 30, 1934. The film is also known by the alternative titles Laurel and Hardy in Toyland, Revenge Is Sweet (the 1948 European reissue title), and March of the Wooden Soldiers (in the United States), a shortened 73-minute abridged version.