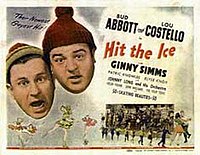 Hit the Ice is a 1943 film starring the comedy team of Abbott and Costello and their first film directed by Charles Lamont. Lamont later directed the team's last few films in the 1950s.

Two sidewalk photographers, Tubby McCoy (Lou Costello) and Flash Fulton (Bud Abbott), aspire to work for the local newspaper. Their childhood friend, Dr. Bill Burns (Patric Knowles), invites them to come along on a call to a building fire. While attempting to photograph the inferno, Tubby is injured and brought to Burns' hospital. While they are there, Silky Fellowsby (Sheldon Leonard), a gangster who is admitted as a patient to establish an alibi for a robbery he is planning, mistake Tubby and Flash for two Detroit hitmen. He expects them to guard the bank's entrance while they rob it, while they mistakenly believe that they are hired to take photographs of the gang as they leave the bank. When the bank is robbed, Tubby and Flash are considered the prime suspects.