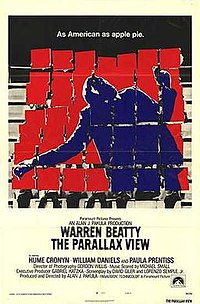 The Parallax View is a 1974 American political thriller film produced and directed by Alan J. Pakula, and starring Warren Beatty, Hume Cronyn, William Daniels and Paula Prentiss. The screenplay by David Giler and Lorenzo Semple Jr. was based on the 1970 novel by Loren Singer. Robert Towne did an uncredited rewrite. The story concerns a reporter's investigation into a secretive organization, the Parallax Corporation, whose primary focus is political assassination.

TV newswoman Lee Carter witnesses the assassination of presidential candidate Charles Carroll atop Seattle's Space Needle. A waiter armed with a revolver is pursued and falls to his death while a second waiter, also armed, leaves the scene unnoticed. A congressional committee decides the killing was the work of a lone assassin. Three years later, Carter visits her former boyfriend, newspaper reporter Joe Frady, claiming others must have been behind the assassination as six of the witnesses to the killing have since died and she fears she will be next. Frady does not take her seriously; however, Carter is soon found dead.