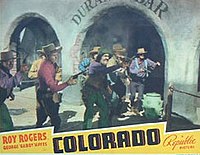 During the American Civil War a Confederate officer who is also a Captain in the Union Cavalry is keeping Federal troops in the Colorado Territory from reinforcing their armies in the East by forming an alliance of secessionists, outlaws, and opportunists as well as arming hostile Indians. Unable to send more reinforcements, the United States Secret Service sends one man, Military intelligence officer Lieutenant Jerry Burke to identify who is behind the troubles and put an end to it. Armed with a sweeping letter of both law enforcement and military powers signed by President Abraham Lincoln Jerry meets his old comrade in arms Gabby to go west.