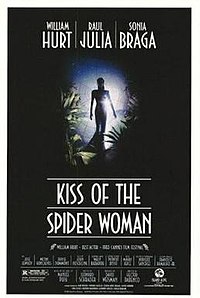 Kiss of the Spider Woman is a 1985 drama film, based on the 1976 novel of the same title by Argentine writer Manuel Puig. It is directed by Argentine-Brazilian filmmaker Héctor Babenco from a screenplay by Leonard Schrader, and stars William Hurt, Raul Julia, and Sônia Braga.

The film centres on a dialogue between two very different individuals who share a prison cell in Brazil during the Brazilian military dictatorship: Valentin Arregui, who is imprisoned (and has been tortured) due to his activities on behalf of a leftist revolutionary group, and Luis Molina, an effeminate homosexual in prison for "corrupting an underage youth."