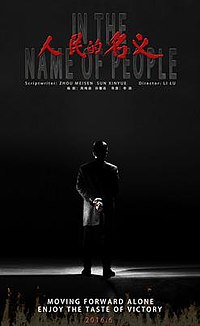 In the Name of the People is a 2017 Chinese TV drama series based on the web novel of the same name by Zhou Meisen. Its plot revolves around a prosecutor's efforts to unearth corruption in a present-day fictional Chinese city. It has drawn large audiences in China, where its release coincides with General Secretary Xi Jinping's leadership's anti-corruption campaign. It is the first broadcast political drama featuring high-level government corruption in China since 2004. The production received significant government funding from the Supreme People's Procuratorate, the highest agency responsible for both investigation and prosecution in the People's Republic of China. The intervention from censors was much lighter due to the support of the authorities. The series is considered by some western observers as the Chinese version of House of Cards.