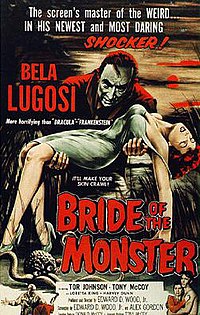 In a stretch of woods, two hunters are caught in a "raging thunderstorm". They decide to seek refuge in Willows House, which is supposedly abandoned and haunted. When they reach Willows House, they find it to be occupied and the current owner repeatedly denies them hospitality. One of the hunters attempts to force his entry into the house, but a giant octopus is released from its tank and sent after the intruders. One of the fleeing hunters is killed by the octopus, while the other is captured by the giant. The owner is a scientist, Dr. Eric Vornoff, and the giant is his mute assistant, Lobo. Vornoff explains that he will perform an experiment on the unwilling hunter, who dies on the operating table.