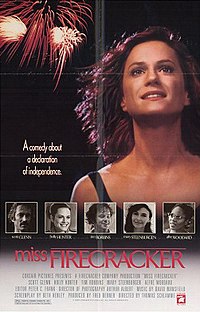 Miss Firecracker is a 1989 American comedy film directed by Thomas Schlamme. It stars Holly Hunter, Mary Steenburgen, Tim Robbins, Alfre Woodard, and Scott Glenn. The film, set in Yazoo City, Mississippi, was written by Pulitzer Prize-winning playwright Beth Henley and is based on her 1984 play The Miss Firecracker Contest.

Carnelle (Holly Hunter) enters the Miss Firecracker beauty pageant which her hometown of Yazoo City, Mississippi, stages every Fourth of July, hoping to emulate her cousin Elain's (Mary Steenburgen) win some years previous. Carnelle was taken in as a waif by her genteel cousins after the death of her mother and grows up promiscuous, brash, unfeminine and lacking in grace. Few expect she can win, her closest friends and relatives think she is heading for a big disappointment, but Carnelle is ever hopeful.