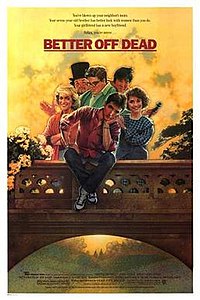 Better Off Dead is a 1985 American surrealist teen black comedy film starring John Cusack and written and directed by Savage Steve Holland. It tells the story of high school student Lane Myer who is suicidal after his girlfriend breaks up with him shortly before Christmas.

In the town of Greendale in northern California, high school student Lane Myer's two main interests are skiing and his girlfriend of six months, Beth. Shortly before Christmas, Beth dumps Lane for the handsome and popular captain of the ski team, Roy Stalin. Roy is an arrogant bully who unfairly rejects Lane at ski team tryouts. Beth also criticizes Lane's car, an old station wagon. Although Lane also owns a 1967 Camaro, he has not been able to get it running and it sits on the drive in a dilapidated state.