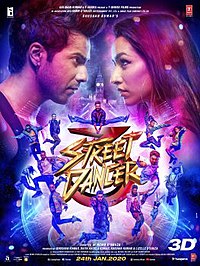 Street Dancer 3D is a 2020 Indian Hindi-language dance drama film directed by Remo D'Souza. It is produced by Bhushan Kumar, Krishan Kumar and Lizelle D'Souza under the banners T-Series and Remo D'Souza Entertainment. The film stars Varun Dhawan, Shraddha Kapoor, Prabhu Deva and Nora Fatehi. Its music is composed by Sachin–Jigar, Tanishk Bagchi, Badshah, Guru Randhawa, Gurinder Seagal and Harsh Upadhyay, and released under the banner T-Series. The story explores a dance competition between some Indian and Pakistani dancers.

The events of the film happens in London. Inder Singh Narula is a dancer who is part of a dance team named Street Dancer. At the beginning of the film,Inder is dancing at the Ground Zero Battle with his brother Sahej Singh Narula cheering for him and while doing a flip stunt, he lands on his leg and injures it. After two years, he is healing, but cannot dance. Sahej forms Street Dancer again and converts it into a studio through money whose sources he is hesitant about revealing. Poddy, is one of Sahej's close friends, along with D and Sushi, who are all part of Street Dancer. While showing the dance studio to the Street Dancer team, they run into Inayat and her team, the Rule Breakers, dance as well. Sahej and Inayat have always been at standstills against each other and they have a dance battle. The Rule Breakers beat Street Dancer, embarrassing Sahej in the process. Inayat's cousin, Zain, takes her home. Their family is very orthodox and Inayat lies about her dancing, hiding the truth from them.