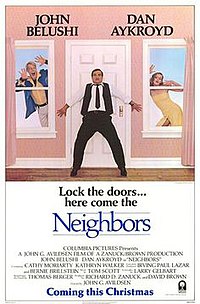 Neighbors is a 1981 American black comedy based on the novel of the same name by Thomas Berger. It was released through Columbia Pictures, was directed by John G. Avildsen, and starred John Belushi, Dan Aykroyd, Cathy Moriarty, and Kathryn Walker. The film takes liberties with Berger's story and features a more upbeat ending. The screenplay of the film is officially credited to Larry Gelbart, although it was extensively rewritten to Gelbart's public disapproval. Released two and a half months before John Belushi's death, the film marks his last film performance.

Earl Keese is a low-key, ineffectual, middle-class suburbanite with a wife, Enid, and a teenage daughter, Elaine. Earl's peaceful, dreary life changes when a younger couple, Vic and Ramona, move in next door. Upon arrival, the new neighbors immediately impose themselves on the Keese household, leaving Earl infuriated with the loud, gung-ho Vic, and flustered by the sly and seductive Ramona. Earl is frustrated by his inability to handle them, and the fact that he can never come up with any proof that the couple are doing anything wrong on purpose. Enid and Elaine are no help, and over the course of one night, the antagonism between Earl and his new neighbors escalates into suburban warfare. Earl begins to question his sanity and that of his wife and daughter. He realizes that his new neighbors have provided him with the most excitement he's had in years and that they can give him a promising future, apart from suburbia and away from his family. In the film's closing scene, Earl joins Vic and Ramona, leaving his family behind and his house on fire.