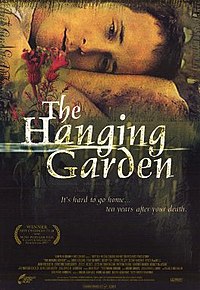 The Hanging Garden is a British/Canadian drama film, written and directed by Thom Fitzgerald and released in 1997. Fitzgerald's feature debut, the film was shot in Nova Scotia.

The film's central character is Sweet William, played by Chris Leavins as an adult and Troy Veinotte as a teenager. Its plot hinges on a fateful incident from his teenage years, when his grandmother (Joan Orenstein) caught him attempting to have sex with his bisexual friend Fletcher (Joel Keller), involuntarily outing him to his dysfunctional family as gay.