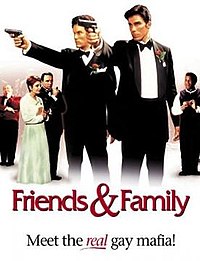 Stephen Torcelli lives with his partner Danny Russo in New York City. When Stephen's parents call to announce a surprise visit for his father's birthday, Stephen and Danny scramble to conceal their double lives. The Torcellis already know that Stephen and Danny are gay; they don't know that they're enforcers for the Patrizzi crime family. Stephen's father is an undercover FBI agent and if he learns of their criminal affiliation he'll be obligated to report them. Stephen and Danny have told them that they run a catering company, even though neither of them can cook.