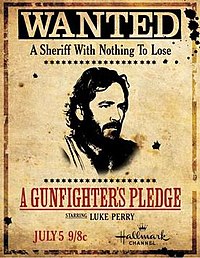 A Gunfighter's Pledge (the working title was The Pledge) is a 2008 Western television film starring Luke Perry. The film premiered on Hallmark Channel in July 2008. It was filmed at Big Sky Ranch in Simi Valley, California.

Ex-lawman Matt Austin (Luke Perry) accidentally kills an innocent man (Alex Paez) while hunting an outlaw who killed his family. He pledges to the dying man that he will take his body to his sister Amaya (Jaclyn DeSantis). Austin wrestles with the idea of telling her he caused the death, but is faced with bigger battles once at the farm. There he gets involved with land baron Horn (C. Thomas Howell), who is trying to take Amaya's land. Their lives are more intertwined than he thought, when he takes on Horn and discovers that Horn has hired the man he was looking for all along.