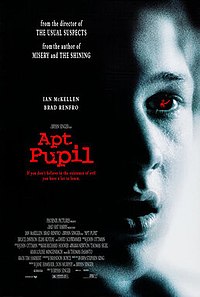 Apt Pupil is a 1998 American psychological thriller film based on the 1982 novella of the same name by Stephen King. The film was directed by Bryan Singer and stars Ian McKellen, Brad Renfro, Bruce Davison, Elias Koteas and David Schwimmer. Set in the 1980s in southern California, the film tells the story of high school student Todd Bowden (Renfro), who discovers a fugitive Nazi war criminal, Kurt Dussander (McKellen), living in his neighborhood under a pseudonym. Bowden, obsessed with Nazism and the Holocaust, persuades Dussander to share his stories, and their relationship stirs malice in each of them. Singer has called Apt Pupil "a study in cruelty", with Nazism serving as a vehicle to demonstrate the capacity of evil.

In Southern California in 1984, 16-year-old high school student Todd Bowden discovers that his elderly neighbor, Arthur Denker, is Kurt Dussander—a former Nazi concentration camp commandant who is now a fugitive war criminal. Todd, fascinated with Nazi atrocities perpetrated during World War II, blackmails Dussander, forcing him to share disturbing stories of what it was like working at Nazi extermination camps and how it felt to participate in genocide.