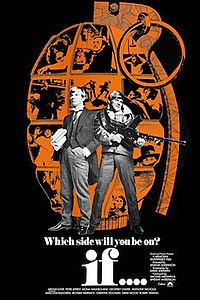 if.... is a 1968 British drama film produced and directed by Lindsay Anderson, and starring Malcolm McDowell as Mick Travis, and also starring Richard Warwick, Christine Noonan, David Wood, and Robert Swann. A satire of English public school life, the film follows a group of pupils who stage a savage insurrection at a boys' boarding school. The film was the subject of controversy at the time of its release, receiving an X certificate for its depictions of violence.

The film opens at a traditional British public school for boys in the late 1960s, as the pupils return after the summer for a new Michaelmas term. Mick Travis (Malcolm McDowell) arrives hiding his face, as he has grown a moustache, and quickly shaves it off. He, Wallace (Richard Warwick), and Knightly (David Wood) are three non-conformist boys in the lower sixth form, their penultimate year. They are watched and persecuted by the "Whips", upper sixth-formers given authority as prefects over the other boys. The junior boys are made to act as personal servants for the Whips, who discuss them as sex objects.