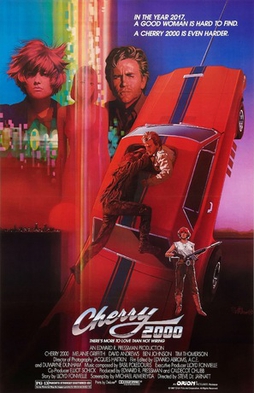 Cherry 2000 is a 1987 American science fiction film directed by Steve De Jarnatt, starring Melanie Griffith and David Andrews, and produced by Edward R. Pressman and Caldecot Chubb. The screenplay was by Michael Almereyda.

In 2017, the United States has fragmented into post-apocalyptic wastelands and limited civilized areas. One of the effects of the economic crisis is a decline in manufacturing, and heavy emphasis on recycling aging 20th-century mechanical equipment. Society has become increasingly bureaucratic and hypersexualized, with the declining number of human sexual encounters requiring contracts drawn up by lawyers prior to sexual activity. At the same time, robotic technology has made tremendous developments, and female Androids (more properly, Gynoids) are used as substitutes for wives.