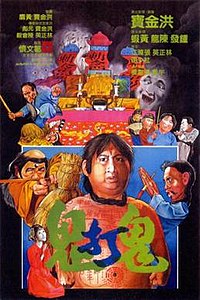 Encounters of the Spooky Kind 1980

The film starts with Bold Cheung having a nightmare about two ghosts, an elder and the young adult, first in a wine jar and then as a human. Cheung narrowly escapes the two ghost, but they still pursue him.