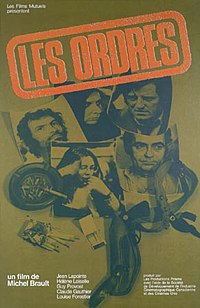 Orders (original title: Les Ordres, known in the United States as: Orderers) is a 1974 Quebec historical drama film about the incarceration of innocent civilians during the 1970 October Crisis and the War Measures Act enacted by the Canadian government of Pierre Trudeau. It is the second film by director Michel Brault. It features entertainer and Senator Jean Lapointe.

The film tells the story of five of those incarcerated civilians. It is scripted but is inspired by a number of interviews with actual prisoners made during the events and its style is heavily inspired by the Quebec school of Cinéma vérité. It is a docufiction.