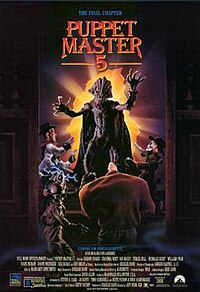 Puppet Master 5: The Final Chapter is a 1994 direct-to-video horror film written by Douglas Aarniokoski among others, and directed by Jeff Burr. It is the fifth film in the Puppet Master franchise, the sequel to 1993's Puppet Master 4, and stars Gordon Currie as the series' third Puppet Master, and Ian Ogilvy, his colleague, whose attempts to salvage the animated puppets of André Toulon (Guy Rolfe) from the Bodega Bay Inn are foiled by a demon. As in the previous film, the puppets serve as protagonists, rather than terrorize as they had in the first and second films. As the title indicates, Puppet Master 5 was intended to be the final installment of the series. However, in 1998 a sixth entry, Curse of the Puppet Master, was released, and the series has been ongoing since.

Following the events of the previous film, Rick Myers has been arrested under the suspicion of having caused the murders of Dr. Piper and Baker, but Dr. Jennings, the new director of the Artificial Intelligence research project and Rick's temporary superior, gets him out on bail. Blade has been confiscated, but he escapes from the police department's evidence room and jumps into Susie's purse as she comes to fetch Rick. Lauren lies comatose in the hospital following the events in the inn. Meanwhile, in the underworld, Sutekh decides to take matters into his own hands and infuses his life essence into his own Totem figure.