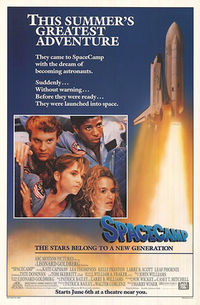 Four teenagers - Kathryn, Kevin, Rudy, and Tish - and 12-year-old Max go to Space Camp at Kennedy Space Center near Cape Canaveral, Florida for three weeks during the summer to learn about the NASA space program and mimic astronaut training. They meet their instructor Andie Bergstrom, a NASA-trained astronaut who is frustrated that she has not yet been assigned to a Space Shuttle mission. Her bitterness is compounded by the fact that her husband, camp director Zach Bergstrom, is an astronaut who has walked on the Moon.