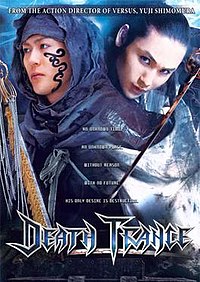 Death Trance is a 2005 Japanese action/fantasy film based on the manga of the same name by Kana Takeuchi. It stars Tak Sakaguchi of Versus fame, alongside Kentaro Seagal (son of actor Steven Seagal) and Takamasa Suga. The film is the directorial debut of Yuji Shimomura, best known for his work as an action director, stuntman, and frequent collaborator of Ryuhei Kitamura. The film's soundtrack features several tracks by the rock band Dir en grey.

In an unknown place at an unknown time, a swordsman named Grave (Sakaguchi) yearns for the ultimate battle. Legend tells of a black coffin kept at the Tougan Temple which has the power to grant any man's deepest desire. Hoping to utilize the coffin's ability to fulfill his wish, Grave infiltrates the temple and steals it. Accompanied by a mysterious young girl (Asada), Grave travels across the land towards a desert oasis, a place the tales indicate as being linked to the coffin's power.