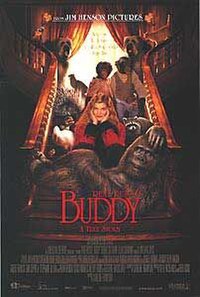 Buddy is a 1997 American family comedy film written and directed by Caroline Thompson and produced by Columbia Pictures and Jim Henson Pictures. It starred Rene Russo as Mrs. Gertrude "Trudy" Lintz and Robbie Coltrane as her husband.

Millionaire animal lover and overall spoiled rich girl Trudy (Rene Russo) adds Buddy, a gorilla, to her family. Buddy finds life in the city very difficult to deal with. Although Trudy raises him as her own son in her mansion (which also houses a few comical chimpanzees, a kitten, a horse, a cheeky talking green parrot, her prize-winning champion pack of briards, a raccoon, and a flock of geese), he becomes hard to control due to his strength. A particularly bad experience in the Chicago World's fair makes things even harder for Buddy. After he goes on an aggressive rampage and nearly destroys Trudy's home, Buddy is taken to an ape sanctuary to live among his own kind in peace.