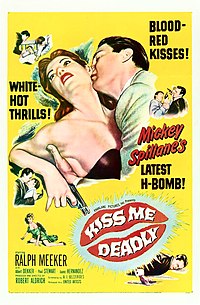 Kiss Me Deadly is a 1955 American film noir produced and directed by Robert Aldrich, starring Ralph Meeker, Albert Dekker, Paul Stewart, Juano Hernandez, and Wesley Addy. It also features Maxine Cooper and Cloris Leachman appearing in their feature film debuts. The film follows a private investigator in Los Angeles who becomes embroiled in a complex mystery after picking up a female hitchhiker. The screenplay was written by Aldrich and A. I. Bezzerides, based on the 1952 crime novel Kiss Me, Deadly by Mickey Spillane.

Mike Hammer is a tough private investigator who, with the assistance of his associate and lover Velda, typically works on "penny-ante divorce cases." One evening, Hammer is forced to suddenly stop his sports car by Christina, an escapee from a nearby psychiatric hospital, who is running barefoot along the road, wearing nothing but a trench coat. Hammer gives her a ride. Christina asks him, whatever happens, to "remember me," alluding to a poem by Christina Rossetti. Thugs waylay them, and Hammer hears Christina screaming as she is tortured to death. The thugs then push Hammer's car off a cliff with Christina's body and an unconscious Hammer inside.