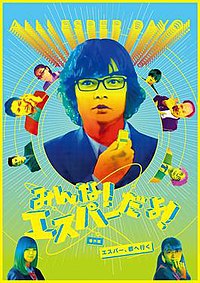 is a 2015 Japanese comedy-drama science fiction mystery television special directed by Sion Sono. It continues the story from the 2013 TV series adaptation of the seinen manga series Minna! Esper Dayo! written and illustrated by Kiminori Wakasugi. Sion Sono later directed a theatrical adaptation of the source material, released as The Virgin Psychics (2015).

After being sent back to Tokyo by her father, Sae Asami sends a text message to Kamogawa Yoshirō asking for help. Together with Yabe, Enomoto, and Mr. Teru, Yoshirō goes to Tokyo, where he infiltrates her high school. Shizuka Tachibana, a student at the school, tells him about a conflict between three different groups at the school, explaining that the male students formerly at the school have left in fear. Yoshirō is convinced that Sae Asami is caught up in the conflict and seeks to help her. On the second day, Yoshirō already finds that Yabe, Enomoto, and Mr. Teru have each been seduced by one of the three different groups.