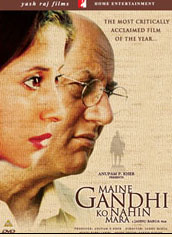 The film explores the downward spiral of a retired Hindi professor, Uttam Chaudhary, (portrayed by Anupam Kher) as he falls victim to dementia. After he sees someone carelessly place an ash tray on a newspaper photograph of Mohandas Gandhi, his senility increases. One night his daughter Trisha, played by Urmila Matondkar, and son Karan discover his room on fire. Trisha takes him to a doctor who says nothing can be done.