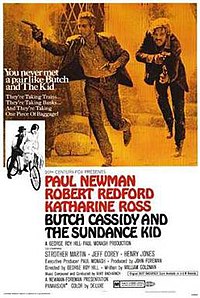 Butch Cassidy and the Sundance Kid 1969

Butch Cassidy and the Sundance Kid is a 1969 American Western Buddy film directed by George Roy Hill and written by William Goldman. Based loosely on fact, the film tells the story of Wild West outlaws Robert LeRoy Parker, known as Butch Cassidy (Paul Newman), and his partner Harry Longabaugh, the "Sundance Kid" (Robert Redford), who are on the run from a crack US posse after a string of train robberies. The pair and Sundance's lover, Etta Place (Katharine Ross), flee to Bolivia to escape the posse.

In 1899 Wyoming, Butch Cassidy is the affable, clever, talkative leader of the outlaw Hole-in-the-Wall Gang. His closest companion is the laconic dead-shot "Sundance Kid". The two return to their hideout at Hole-in-the-Wall (Wyoming) to discover that the rest of the gang, irked at Cassidy's long absences, have selected Harvey Logan as their new leader.