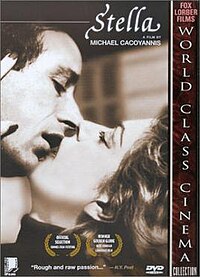 Stella is a 1955 Greek film is a retelling of Carmen featuring Melina Mercouri. The film was directed by the Greek Cypriot Michael Cacoyannis and written by Cacoyannis and Iakovos Kambanelis. The music was composed by Manos Hadjidakis and Vassilis Tsitsanis.

The story of a fiercely independent and uncompromising young woman. Stella, a rembetiko singer at Paradise nightclub, lives a guiltless, turbulent life. Her innate independence and assertive nature lead her to numerous passionate love affairs. While with Aleko, son of a wealthy family, she decides, as is her habit, to break up before the relationship wears off. Once she meets Miltos, a young soccer player, she seems to change. At first, she avoids his advances, but, later, gives in to him. However, she can only be with him on her own terms. No matter how much she loves him, she mostly values her freedom. Things turn complicated when she is called to choose. She repeatedly rejects Miltos marriage proposals. When Miltos finally forces her to accept the idea of marriage, Stella does not appear in church, despite Miltos repeatedly warning her that he will kill her if she doesn't marry him. Miltos kills her with a dagger at end of the film.