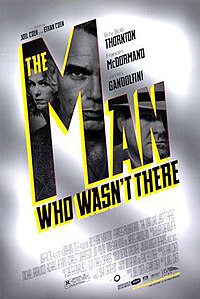 The Man Who Wasn't There is a 2001 crime film written, produced and directed by Joel and Ethan Coen. Billy Bob Thornton stars in the title role. Also featured are Tony Shalhoub, Scarlett Johansson, James Gandolfini, and Coen regulars Frances McDormand, Michael Badalucco, Richard Jenkins and Jon Polito. The plot follows a laconic, chain-smoking barber as he plans to blackmail his wife's boss and lover for money to invest in dry cleaning.

In 1949, Ed Crane is a low-key barber in the town of Santa Rosa, California. He is married to Doris, a bookkeeper with a drinking problem, and he works in a barber shop that is owned by his brother-in-law, Frank.