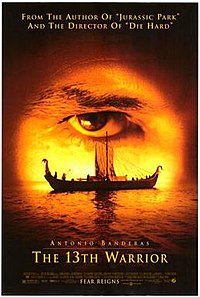 The 13th Warrior is a 1999 American historical fiction action film based on Michael Crichton's 1976 novel Eaters of the Dead, which is a loose adaptation of the tale of Beowulf combined with Ahmad ibn Fadlan's historical account of the Volga Vikings. It stars Antonio Banderas as ibn Fadlan, as well as Diane Venora and Omar Sharif. It was directed by John McTiernan; Crichton directed some uncredited reshoots. The film was produced by McTiernan, Crichton, and Ned Dowd, with Andrew G. Vajna, James Biggam and Ethan Dubrow as executive producers.

Ahmad ibn Fadlan is a court poet of the Abbasid Caliph Al-Muqtadir of Baghdad, until his amorous encounter with the wife of an influential noble gets him exiled as an "ambassador" to the Volga Bulgars. Traveling with his father's old friend, Melchisidek, his caravan is saved from Tatar raiders by the appearance of Norsemen. Taking refuge at their settlement on the Volga river, communications are established through Melchisidek and Herger, a Norseman who speaks Latin. From Herger, the two learn that the celebration being held by the Northmen is in fact a funeral for their recently deceased king. Herger also introduces them to one of the king's sons, Buliwyf. Ahmad and Melchisidek then witness a fight in which Buliwyf kills his brother in self defense, which establishes Buliwyf as heir apparent, followed by the Viking funeral of their dead king, cremated together with a young woman who agreed to accompany him to Valhalla.