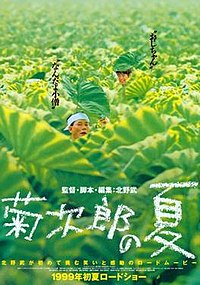 Kikujiro is a 1999 Japanese road drama film starring, written, and directed by Takeshi Kitano. Its score was composed by Joe Hisaishi. The film was entered into the 1999 Cannes Film Festival.

Masao, who lives alone with his grandmother in an old Shitamachi area of Tokyo, receives a package, and in looking for a seal finds a photo of his long lost mother. He finds her address in Toyohashi, several hundred miles to the west. Leaving home to see his mother, he meets his grandmother's neighbors, Kikujiro and his wife. Kikujiro's wife forces Kikujiro to accompany Masao on a journey to see his mother, telling Masao's grandmother that they are going to the beach.